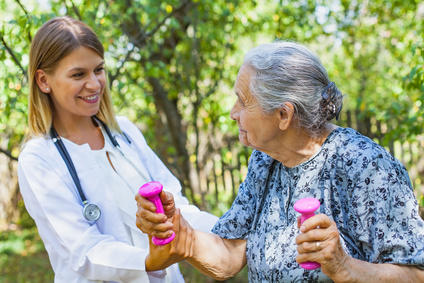 More than age, it is the physical autonomy degree that, associated with sarcopenia precipitates mortality.

Sarcopenia is characterized by the progressive loss of muscle mass, strength and performance with aging and disease. It is a major risk factor for the health of the elderly: it has important consequences in terms of falls and fractures, functional decline, reduced mobility, hospitalization, morbidity and mortality. There is little data on the impact of sarcopenia in elderly hospitalized patients. In them, it is difficult to distinguish the effect of the disease from that of sarcopenia on the loss of muscle. Based on the hypothesis that sarcopenia may predict mortality in hospitalized elderly patients with impaired mobility, German researchers explored associations between sarcopenia and one-year mortality in a sample of subjects with varying degrees of mobility and autonomy.

Limited mobility and dependence are to watch

The recruited population included 198 patients from a geriatric ward with an average age of 82.8 ± 5.9 years (70.2% female). Nearly 40% of the subjects were at risk of malnutrition and 33% were suffering from it. More than 25% of patients had sarcopenia. They were more often malnourished or at risk of malnutrition and had lower weight, muscle mass and BMI than subjects without sarcopenia.

Of the 198 patients followed, 42 died in the first year, of which 14 had sarcopenia. They had low muscle strength, several co-morbidities and poor nutritional status. However, sarcopenia did not seem to explain mortality. It is an analysis of subgroup topics that reveals the link between sarcopenia and mortality. In patients with limited mobility before admission or at the time of discharge, sarcopenia is associated with a doubling of mortality risk. Similarly, in a subgroup of patients with scores of autonomy (Barthel index) lower than 60 (n = 45), 70 (n = 73) and 80 (n = 108), the risk of death is respectively 3.63, 2.80 and 2.55 times higher in sarcopenic patients.

The researchers draw two lessons from their study: (1) the prevalence of sarcopenia in elderly patients hospitalized estimated at 25% and (2) it is significantly associated with a higher risk of mortality among elderly patients at limited mobility and degraded functional abilities (autonomy), regardless of age and other clinical variables.

This underscores, for them, the need for early detection of elderly sarcopenic patients whose daily activities are impaired in order to limit their long-term functional decline as well as their risk of mortality.