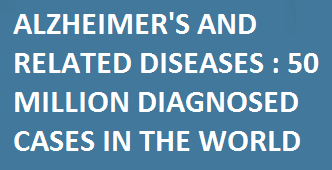 Alzheimer’s disease is the main cause of dementia in over 75-year- olds (Ramaroson, Helmer, Barberger-Gateau, Letenneur, & Dartigues, 2003). Alzheimer’s Disease is a progressive, incurable disease in which cognitive abilities gradually degenerate rendering patients dependent on carers.

Alzheimer’s disease and the dementia associated with it have become a public health issue. Government authorities ran a specific awareness campaign about the disease between 2008 and 2012, which has been followed up by a second campaign, launched in 2013 on the topic of “neurodegenerative diseases”.
Know more